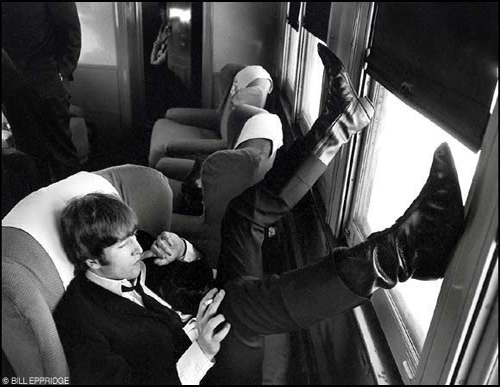 Bill Eppridge
John Lennon on the train to New York after the Beatles' concert at
Washington Coliseum, Feb. 11, 1964
Astonishing, richly spontaneous, and almost entirely unpublished images of the Beatles’ historic first trip to the United States, as chronicled by  award-winning LIFE photographer Bill Eppridge  given unique access to their tour. Published to coincide with the fiftieth anniversary of the Beatles’ first visit to the United States, this rare and mostly unseen collection of photographs marks the beginning of the British Invasion. In February 1964, photographer Bill Eppridge was on assignment for Life magazine to cover the band’s arrival at JFK airport. He was then invited to continue shooting in their room at the Plaza Hotel and during the days that followed, notably at the Ed Sullivan Show rehearsal and historic performance; in Central Park; on a train ride to Washington, D.C., for the concert at the Washington Coliseum; at the British embassy; and at their renowned performance at Carnegie Hall. The book is an intimate fly-on-the-wall account of a visit that introduced the Beatles to America and changed the course of music, internationalizing the industry and opening the door for other artists to achieve global success.
On Thursday, April 10, there will be a special book signing with Bill Eppridge's wife and editor, Adrienne Aurichio, of Six Days that Changed the World. The book was created before Mr. Eppridge died in 2013, and was published posthumously. Please join us in Booth #421, Monroe Gallery of Photography, from 4 - 6 PM.
From April 25 through June 22, the exhibition Bill Eppridge: 1964 will be on view at Monroe Gallery of Photography.
More information about the photographs may be seen on the New York Times' LENS blog.

Helen Klisser During for WestportNow.com