Bill Eppridge’s Vibrant Portrait of America in the 1960s: A new exhibition charts the legacy of a photojournalist who chronicled the nation during a turbulent era. 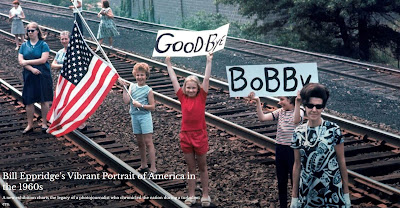 “A journalist does not necessarily imply ‘artist’ but you are not going to make your point if you cannot make a picture that people will stop and explore,” said Bill Eppridge (1938 – 2013). As one of the most accomplished photojournalists of the 20th century, Eppridge chronicled the breaking stories of his day, helping to shape the way in which the nation navigated a tumultuous era. Whether documenting the Vietnam War, Woodstock, and the Civil Rights Movement or bearing witness to the tragic end to Senator Robert Kennedy’s presidential campaign, Eppridge brought a humanistic approach to reporting. (click for full article with photographs)

The Legacy of Bill Eppridge is on exhibit through November 20, 2022