Censorship Is a Missing Picture: Photojournalist Grant Baldwin discusses what we don't see

Censorship Is a Missing Picture: Photojournalist Grant Baldwin discusses what we don't see 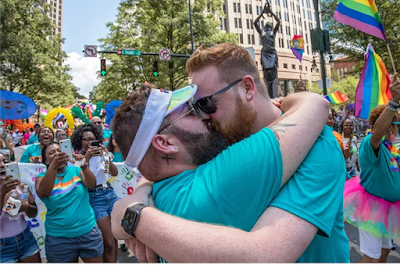 What is censorship? How do we recognize when it is happening, and how do we address it? Please join local photojournalist Grant Baldwin to discuss his photographs, their impact, and his experience with censorship.

The Gaston County Manager ordered the removal of a photograph on display as part of an exhibit titled Into the Darkroom at the Gaston County Museum of Art and History. According to the Charlotte Observer, "LGBTQ equality advocates are demanding officials in Gaston County reverse their decision to remove a photo showing two men recently engaged, kissing, from a museum exhibit. The photograph, taken by Charlotte freelance photojournalist Grant Baldwin, shows Justin Colasacco and his husband Bren Hipp kissing after Colasacco dropped to one knee and proposed in front of the crowd at the 2019 Charlotte Pride Festival & Parade. They married Oct. 4, 2020." According to the Gaston Gazette, the Gaston County Manager claimed that the photograph was political advocacy and wanted Mr. Baldwin to replace it with something else. The photojournalist chose instead to leave the display spot on the wall empty to demonstrate that something was missing.

Please join the Charlotte Journalism Collaborate to discuss what censorship means in our community.

Grant Baldwin's photograph is featured in the current exhibit "Imagine A World Without Photojournalism", on view through September 18. Monroe Gallery hosted Nina Berman and David Butow for a discussion on July 22: Threats to Photojournalism".