DOROTHEA LANGE'S GRANDAUGHTER TO GIVE PRESENTATION IN SANTA FE

Dyanna Taylor grew up thinking all grandmothers took photographs.
But what pictures. 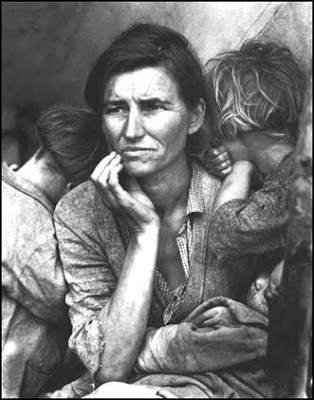 The Santa Fe filmmaker is the grandchild of Dorothea Lange, the great Depression-era photographer famous for her poignant and compelling images of migrant workers, sharecroppers and residents of Japanese internment camps. Taylor, now working on a documentary about her famous grandmother, will talk about Lange's work and her memories at 5 p.m. Friday at the National Park Service Building, 1100 Old Santa Fe Trail.

The fiercely independent Lange was born in Hoboken, N.J., her life forged by two traumatic events: the abandonment by her father when she was 12 years old, and her contraction of polio when she was 7, which left her with a limp.

Instead of moving into the teaching career her mother envisioned for her, she went to work for a famous portrait photographer in Manhattan named Arnold Genthe. She absorbed his artistry, the pain of her childhood feeding her sense of what suffering meant. When the U.S. government hired her to document the Depression, she produced masterworks such as the famous "Migrant Mother," shot in 1936, and now hanging in the Library of Congress collection.

"She was a challenge, and she was a charismatic woman," Taylor said. "She was quite brilliant."

Taylor's film is slated for the PBS "American Masters" series. She's still working on the documentary and hopes to see it air in 2012. It will include previously unseen footage of the photographer, as well as interviews with her still-living assistants. Lange died of esophageal cancer in 1965 at age 70.

"She was magical," Taylor said. "Everything about her was exotic. She dressed in an interesting and unique way. She wore capes; she wore berets, always heavy silver jewelry. This was not what people were wearing in the early '50s."

Lange lived in Taos for about a year with her first husband, the painter Maynard Dixon. Then a young mother, she spoke of watching the photographer Paul Strand drive by the small adobe house lent to her by Mabel Dodge Luhan. It was her second husband (Taylor's grandfather) Paul Taylor, a labor economist, who got her work documenting the Dust Bowl and Depression refugees.

Lange was the antithesis of the doting grandmother who was eager to praise the slightest accomplishment, Taylor said.

"You couldn't be a lightweight around her," she explained. "You really had to put your thinking cap on.

I learned from her as a photographer. She taught me to look twice at what was in front of me."

Taylor remembers proudly bringing Lange a handful of stones, anticipating praise. Instead of thanking her, Lange asked her if she really saw them.

"I was feeling slightly hurt and rejected," she said.

But the incident taught Taylor to look beyond the surface, a skill that fueled her own photographic career. The family often spent holidays, birthdays and weekends at Lange's cabin north of San Francisco.

"We would hike," Taylor said. "We'd spend time at the beach. We would look for stones. She would insist that we study geometry. She would tutor us in things that weren't necessarily taught in school. She was intimidating and charismatic, and you always wanted to be close to her, even though it was a little scary."

Toward the end of her life, Lange was working on a series about home, "the place where you live." She and her second husband, Paul Taylor, took two international trips, where she photographed Indonesia, Asia, Egypt and Iran. Taylor inherited her grandmother's cameras when she died.

She soon realized she preferred moving images to still photography.

"Also, it was easier than trying to replicate hers, which were so amazing," she added.

If she were alive today, Lange would be horrified by the current economic collapse and on the front lines documenting it, Taylor said.

"She and my grandfather would just be appalled," she continued. "My grandfather would be rolling over in his grave. He fought his whole career to keep the family farm alive. Dorothea would be right in there with everything happening during the recession — people losing their homes."

"I went out there," she said. "It was difficult to film. People are angry. People trusted her. They don't trust people with cameras anymore."

Related: Monroe Gallery of Photography will present the comprehensive exhibition "Carl Mydans: The Early Years" October 1 - November 25. Mydans was a contemporary of Dorothea Lange and was also employed by the Farm Security Administration, prior to joining LIFE magazine in 1936.