New York, NY -- The 8th annual Lucie Awards will honor The Eddie Adams Workshop at its Lincoln Center gala on Wednesday, October 27, 2010. Hosted by the non-profit, charitable Lucie Foundation, the awards recognize photographers and organizations that have made significant contributions to the advancement of photography. This year, the Workshop will be presented with the Visionary Award.


Other honorees at this year's event in New York City include the photographers Tina Barney, Howard Bingham, James Drake, Graciela Iturbide, Lee Tanner and the Center for Photography at Woodstock. Tickets are on sale at http://www.lincolncenter.org/.

In 1976, Pulitzer Prize-winning photographer Eddie Adams bought a defunct dairy farm in Jeffersonville, New York, with an idea of transforming the big rural property into a “foto farm.” What that meant wouldn't become clear for another two decades, when he and wife Alyssa Adams created Barnstorm: The Eddie Adams Workshop, an invitation-only, tuition-free boot camp for 100 young photographers taught by the top professionals in the field. Since 1988, the Workshop has been a transformative experience for those lucky enough to attend the annual four-day program, and some have gone on to win their own Pulitzers and return as faculty, treating the next generation of photojournalists to a unique forum for shooting, editing and learning.

Students are divided into 10 teams of 10, each guided by a professional photographer, editor and a researcher through their assignments in and around Jeffersonville, 20 minutes from the original Woodstock concert site, and two hours from Manhattan. Together, these teams of young photographers descend on the astonishingly diverse community, shooting amid the rich, fall colors on the surrounding birch and fir trees that will factor heavily into their pictures. By the end of the weekend, several students are awarded with one of many coveted scholarships, internships, editorial assignments and other career-boosting prizes.

Throughout the years, faculty and guest speakers have included some of the most esteemed names in photography: Gordon Parks, Alfred Eisenstaedt, Cornell Capa, Mary Ellen Mark, James Nachtwey, Platon, Hal Buell, James Colton, Kathy Ryan, Bill Eppridge, Eugene Richards, Nick Ut, Ralph Gibson, Jay Meisel and many others. The idea behind Barnstorm was to allow a new generation to meet these seasoned professionals, to exchange ideas, techniques and philosophies in the course of a single weekend, and maybe save some crucial time in their budding careers. It continues to operate with the active support of Nikon and other sponsors, keeping the Workshop alive in a difficult economy and an ever-shifting new media terrain.

That impulse is rooted in a shared commitment to picture journalism that Eddie Adams showed throughout his long career. Before his death at age 71 in 2004, Adams covered 13 wars, working for the Associated Press, Time and Parade, and enjoyed private portrait sessions with the likes of President Ronald Reagan, Clint Eastwood and Pope John Paul II. He witnessed the arrival of the Beatles in America and joined Fidel Castro at the Cuban leader's private fishing hole. But Adams is best known for one of the most notorious photographs of the Vietnam War, documenting the execution of a Viet Cong prisoner on the streets of Saigon in 1968 with a sudden bullet to the head. The picture was published around the world, won Adams a Pulitzer, and is said to have contributed to America's exit from the war.

That experience remained with him, and at the Workshop he established an annual tribute to six photojournalists killed in Vietnam, a solemn but ultimately joyous ceremony. It is one more vivid memory that students take away from the experience.

Now in its 23rd year, the Eddie Adams Workshop lives on under the direction of Alyssa Adams, currently deputy photo editor at TV Guide. Top professionals still come to share, mentoring students who are enrolled based entirely on the quality of their work, not on ability to pay. Little has changed at the farm since the very beginnings of Barnstorm, beyond the inevitable shift from slide film to digital over the last decade, and the absence of Eddie himself. 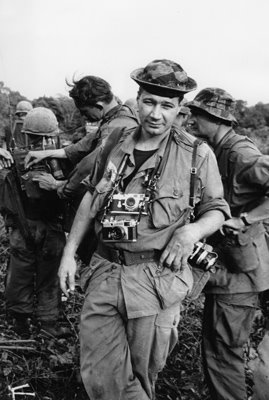