With previously unpublished photographs by an incredibly diverse group of the world’s top news photographers, Photojournalists on War presents a groundbreaking new visual and oral history of America’s nine-year conflict in the Middle East. Michael Kamber interviewed photojournalists from many leading news organizations, including Agence France-Presse, the Associated Press, the Guardian, The Los Angeles Times, Magnum, Newsweek, The New York Times, Paris Match, Reuters, Time magazine, VII Photo Agency and The Washington Post to create the most comprehensive collection of eyewitness accounts of the Iraq War yet published. These in-depth interviews offer first-person, frontline reports of the war as it unfolded, including key moments such as the battle for Fallujah, the toppling of Saddam’s statue, and the Haditha massacre. The photographers also vividly describe the often shocking and sometimes heroic actions that journalists undertook in trying to cover the war, and discuss the role of the media and issues of censorship. These hard-hitting accounts and photographs, rare in the annals of any war, reveal the inside and untold stories behind the headlines in Iraq.


Each book is accompanied by a signed 8×10 inkjet print of Joao Silva’s ‘Sniper’.
Each book is signed by five photojournalists interviewed in the book.
Each book comes in presentation box.
Price is $500


NY Times Lens Blog: "It is a brutally honest account of the war in Iraq from the point of view of the men and women who photographed it."


--This important book is almost ready for publication. Subscription of these 30 special-edition books will clear the final financial hurdle to publication. Monroe Gallery has placed our orders, please consider placing yours! 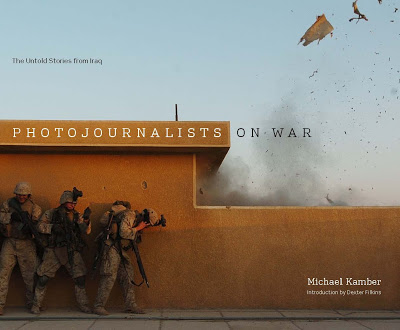