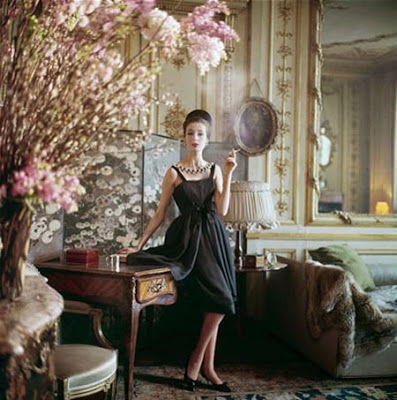 A Dior gown photographed for LIFE in 1960 in the 17th century home of Suzanne Luling, then directrice of Dior
Following the major Retrospective exhibition held at Monroe Gallery of Photography April 24 - June 28, 2009, there has been a strong resurgence of interest in and appreciation of the photography of Mark Shaw.

Mark Shaw lived from 1922-1969. As a photographer he is perhaps best known for his images of Jacqueline and John F. Kennedy and their family which he originally photographed on assignment for LIFE magazine, and later as their family photographer. He developed a strong friendship with JFK and Jackie while Kennedy was still a Junior Senator, and regularly visited the White House during their time there documenting the private glamour of America's Camelot. After JFK's death a selection of photographs were published in the book "The John F. Kennedy's - A family album". This book sold over 200,000 copies when it was first published, very impressive even today. Mark Shaw’s images of the Kennedys were widely used in the exhibition “Jacqueline Kennedy – The White House Years”, originating at the Metropolitan Museum of Art in New York and later traveled around the country.


Also a leading fashion photographer, Mark Shaw worked for Harper's Bazaar, Mademoiselle, and a host of other fashion magazines. He started working for LIFE magazine in 1952 and in 16 years shot 27 covers and almost 100 stories. Throughout the 1950's and 1960s' Mark Shaw shot the European fashion collections for LIFE, and was one of the first photographers to shoot fashion on the runways and "backstage" at the couture shows. Decades after his death, Mark Shaw’s photographs continue to be published regularly in books and magazines.

Read a review of the Retrospective exhibition here.

Listen to a radio inteview with Michelle Monroe about Mark Shaw and the gallery's focus on photojournalism here.