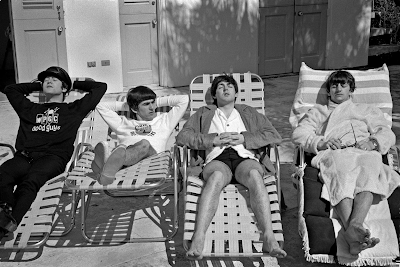 The Beatles, Miami 1964,” at a private residence after their appearance on “The Ed Sullivan Show.” (Courtesy of Bob Gomel)

SANTA FE – When Sidney and Michelle Monroe stepped into the workplace of the great photojournalist Alfred Eisenstaedt decades ago, they were more than intimidated.

“There’s a picture of Hitler and Mussolini shaking hands in his office,” Michelle Monroe said. “We’re not peers.

“Honestly, we could barely catch our breath, we were so star-struck.”

That meeting in New York’s Time-Life building would launch a career of exhibiting some of the most pioneering photojournalists in the country. Monroe Gallery will celebrate the glory days of Life magazine with about 40 images by such photographic luminaries as Eisenstaedt, Margaret Bourke-White, Bob Gomel and Bill Ray through June 26.

Known as the father of photojournalism, Eisenstaedt is best recognized for his image of a sailor kissing a nurse in a dance-like dip during Times Square’s V-J celebration in 1945. When the Monroes approached him, he had never shown his work in a gallery before.

In 1963, Life assigned the photographer a photo essay on life in Paris.

“He didn’t know what he could do that Henri Cartier-Bresson hadn’t done,” Sidney Monroe said.

While he was walking the streets, Eisenstaedt spotted a playground with a puppet show of “St. George and the Dragon.” He crawled under the stage and began shooting the crowd from beneath the drape. The photographer captured the children in the audience, their facial expressions tumbling from delight into fear and horror.

“It’s almost timeless, aside from their clothing, it could be any time,” Sidney said. “It’s a great example of what a photographer does.”

Gomel was already in Miami to shoot the Muhammad Ali-Sonny Liston fight when his editors asked him to photograph the Beatles. The foursome had flown south to relax immediately after their 1964 “Ed Sullivan Show” debut. Gomel shot them sunbathing at a private home.

“The editor of Life was really interested in the world of pop culture,” Sidney said. “The Beatles would sell so many magazines.”

Carl Mydans had been captured by the invading Japanese when the Philippines fell during World War II. He was freed during a prisoner exchange in 1943.

In 1945, Mydans photographed the Japanese formal surrender on the deck of the battleship USS Missouri in front of Gen. Douglas MacArthur.

Mydans had also shot the famous image of MacArthur wading onto a Philippines beach.

“When news came of the formal surrender, it was bedlam,” Sidney Monroe said. Mydans approached a MacArthur aide to make sure he gained entry to the ship.

The photographer captured the iconic moment while he was straddling a cannon. As soon as he shot the photo, a sailor pulled him off.

“The U.S. officials came in wearing their day-to-day khakis, much to the displeasure of the Japanese,” Sidney Monroe said.

Bourke-White was the first photographer hired by Life.

When she photographed Mahatma Gandhi in 1946, he insisted she learn to spin in order to have an audience with him.

“He had no time to digress from his campaign to free India from British oppression,” Sidney said. “She needed him and he knew he needed her.”

Founded by Henry Luce, publisher of Time magazine, Life was long one of the most popular and imitated of American magazines, selling millions of copies a week. Published weekly from 1936 to 1972, it emphasized photography.

“They’re all in their very defining moments,” Sidney Monroe said. “The moments are in our heads because they’re part of our history.”

WHAT: “The LIFE Photographers”