NEW YORK IN REVIEW: PART ONE - THE ALFRED EISENSTAEDT AWARD

Alfred Eisenstaedt
We left Santa Fe just as a snowstorm was approaching, and arrived in New York just as a major wind and rain storm was departing. Set up for AIPAD The Photography Show commenced Tuesday at 3 PM. More posts about the Show will be posted here in future installments. 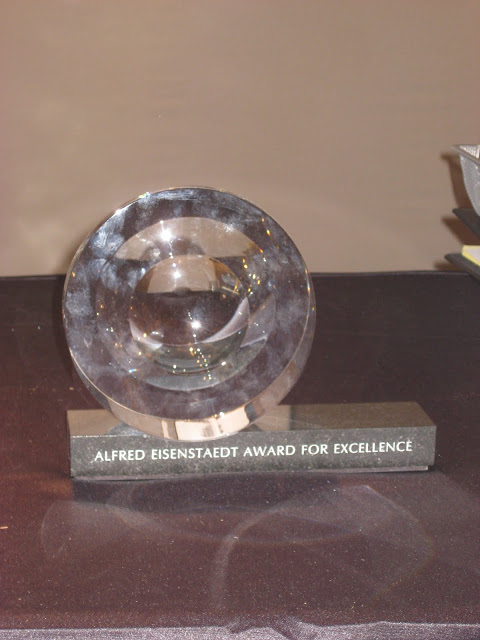 The award, custom designed by Stueben Glass
The Alfred Eisenstaedt Award for Excellence in Photography was instituted in 1998 by Life magazine, also known as "the Eisie", after the pioneer of photojournalism who died in 1995 at the age of 96. Sidney and Michelle Monroe met Eisie in 1986, and he inspired and informed their path as galleriests specializing in photojournalism. Past recipients of the award include Bruce Weber, David La Chapelle, Gordon Parks, Stephen Wilkes, and Sir Edmond Hillary.

"In honoring Sid and Michele Monroe, we honor the photography of LIFE Magazine and therefore we celebrate the Photographers whose images made LIFE Magazine the most famous American Magazine of the 20th Century.

How amazing is it that a collection of photography produced over a 36-year period, ending in 1972, lives-on more than a quarter century later?

In fact in 2009 LIFE Books published 16 books and bookazines printing over 4 million copies and LIFE.com, which launched one year ago, reaches over 3 million unique users per month and generates over 35 million monthly page views.

And beyond these folks, the power of LIFE photography has been perpetuated through the passion of LIFE’s readers and fans, curators, collectors, art dealers and, I think safe to say, everyone in this room.

But today we single-out two people’s passion for LIFE. A passion that has achieved the sale of more LIFE photographs than any other single gallery and therefore contributes to our continued celebration of LIFE’s amazing Photographers."

Then Regina Feiler, Director of the LIFE Picture Collection and the LIFE Gallery of Photography presented the award to Sid Monroe, and our daughter, Veronica, accepting on behalf of Michelle:

"Good morning; it is so nice to see you all here today. For those of you who may not know me, my name is Regina Feiler and I have been the Director of The LIFE Gallery since 2007.

Most days, I really, really like my job; today, I am awed by it. It is truly something to have daily access to material that literally captures this nation’s history; as they say, a picture is worth a thousand words. It is quite another to have the privilege to speak to the men and women who can actually augment those images with their own words, if I just ask, and you can be sure, I do, as often as possible.

In this room are the tales of Robert Kennedy; of Muhammad Ali; of Marilyn Monroe singing to the President; of Frank Sinatra and Steve McQueen; Woodstock and the Beatles.

While we have done, and continue to do much in this organization to further the message of the original intent; to create and feature the greatest, and unparalleled photojournalistic brand ever created, there is one person who rises above the rest OUTSIDE of this organization in doing so.

"Sid first developed a passion for LIFE imagery in his days at the Circle Gallery here in Soho. In Sid and Michelle’s move to open their own gallery in Santa Fe, their passion for LIFE’s photography is what drove them from the day they opened to feature LIFE imagery as prominently as they do. But it wasn’t just the imagery that set the spark; and I know that, because Sid said it himself in 2007.

"…at the beginning of my career in the gallery world — to meet Alfred Eisenstaedt and work with him — set a spark, because I discovered I had this great admiration for the field of journalism and the pioneers who made picture journalism what it was, and what it became over the ensuing years. It was like joining a fraternity because almost all of these photographers were familiar with each other… [A]s we became known as specializing in photojournalistic works, one by one, more and more, came on board. So that’s really been our core focus, and particularly in the seven or eight years since we moved to Santa Fe."

And if the above weren’t true, would so many photographers be sitting here in this room today to honor Sid and Michelle?"


We were very humbled to receive an award named for the very photographer who inspired us, over 25 years ago. However, in truth, this award belongs to each and every photojournalist we have been privilaged to have known and represent - it is they who make us look good.

Part two of Monroe Gallery in New York to follow!