Via The New York Times

The Year In Pictures

While many people, fearing the virus, continued to stay close to home, photographers traveled the world, documenting turmoil and triumphs. 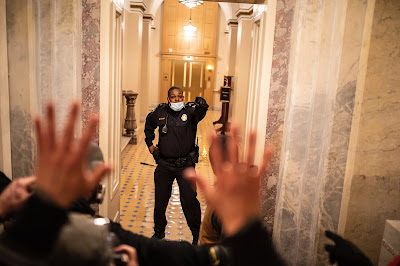 "For Ashley Gilbertson, this photograph captured the intensity of the moment when a single man stood firm against a massive mob overrunning the United States Capitol."

"As they turned a corner, the mob paused. A lone policeman was shouting at them to stop and turn back. Men in QAnon shirts shouted back, and another waved a Confederate flag in front of the officer. He drew his baton to fight them back, but it fell to the ground in the chaos. He unclipped the holster of his pistol and put his hand on the grip, and I put a rioter between me and him as a shield. But the officer never drew his sidearm.

His name, I would later learn, was Eugene Goodman. He acted as a diversion to draw rioters away from the Senate chamber. There weren’t many moments that we can be proud of as a nation from Jan. 6, 2021, but this is one of them."

Tags: 2021 in pictures history January 6 photographs of the year riots year in pictures