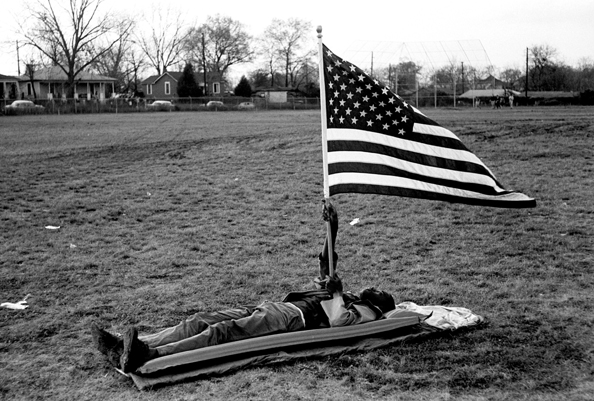 Via The Santa Fe Reporter
July 1, 2014
By Enrique Limón


More than 50 iconic photographs by LIFE veteran Steve Schapiro go on display this Saturday at Monroe Gallery’s Once Upon a Time in America.


Over the last five decades, Schapiro has documented the transcendent and the mundane surrounding some of the country’s greatest battles, accomplishments and cultural milestones—ranging from Robert F.Kennedy’s 1968 presidential campaign to candid moments depicting Marlon Brando on the set of The Godfather.


A lifelong practitioner of the craft, Schapiro developed a love for photography at age 9, when he would try to emulate the shots of the father of photojournalism, Henri Cartier-Bresson.


“This is a show about America and different aspects of America,” Schapiro tells SFR from his Chicago home.


“It was really a turning point, in the sense that so many people were mobilized,” Schapiro reminisces, “because, really what a lot of the Civil Rights movement was about was trying to energize people in the South—particularly black people—to vote and to feel that it was safe to vote and that they could vote, despite the fact that the culture of the times was against them.”


Witnessing several interruptions and threats of violence during the marches, Schapiro kept on shooting and at one point captured a youth resting under the shadow of an American flag.


“It’s symbolic of the spirit that kids have regarding their feelings that things were only going to get better, and that nonviolence was the proper course to take."


That particular picture wasn’t selected by magazine editors at the time, but was like many in his oeuvre, one that came to be by chance after he went through his old contact sheets.


“Sometimes you look at pictures and you don’t know why they’re iconic or why people relate to them,” he says. “It’s a subtle thing, but there are just moments where all of that happens and the image presents a statement that goes in some ways beyond what you’re seeing.”