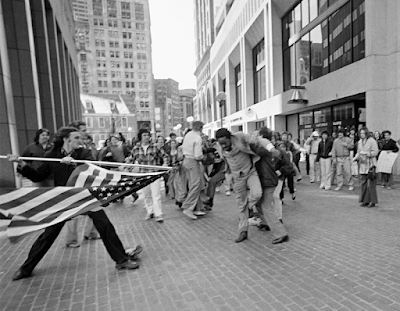 Gallery photographer Stanley Forman has retired after 55 years cruising the streets of Boston in search of breaking news.

"If there’s a definitive Pulitzer Prize-winning photo, it’s “The Soiling of Old Glory” — Stanley Forman’s spot news winner for the Boston Herald American in 1976. In it, a youth turns an American flag into a weapon to use against a Black man at a school busing protest.

Then again, make that two definitive photos: The year before, Forman also won the Pulitzer for spot news with a harrowing image of a woman and her goddaughter falling out of the sky in his photo, “Fire Escape Collapse.”

Forman, 76, who began in newspapers in 1966 and switched to TV news videography two decades later, spent 55 years cruising the streets of Boston in search of breaking news, much of that time in a gas-guzzling Mercury Monarch. He retired on Dec. 31.

Or so he says.

“I have a great home life,” he said by phone from his home in Boston’s northern suburbs on the first weekend of the rest of his life. His primary plan is providing daycare for his four-month-old grandson, adding: “And I can do a limited amount of chasing on my own.”