The Timeless Appeal of Tommie Smith, Who Knew a Podium Could Be a Site of Protest 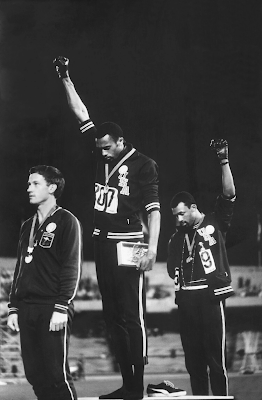 Via The New York Times

"What happens when a person becomes a symbol? Smith and Carlos would both see their careers as athletes overshadowed by the moment. The years, decades really, after their defiant act brought struggle and sometimes suffering: hate mail and death threats, broken marriages and psychic pain. Two days after the medal ceremony, longtime Los Angeles Times sports columnist John Hall wrote that “Tommie Smith and John Carlos do a disservice to their race — the human race.” Even many of those that celebrated Smith and Carlos’s act did so under the mistaken belief that they had given the Black Panther salute — something that, for his part, Smith never intended.

What happens when a symbol becomes a person again? The last decade, a time of expanding awareness of racist violence and trauma in the United States, has prompted a dramatic reassessment of Smith. Once pilloried, he’s now lionized. People build statues of him. In 2019, the United States Olympic Committee, the same body that had suspended him from the Olympic team in 1968, inducted him into its Hall of Fame. The Smithsonian collected the clothes he wore on the medal stand: his singlet and his shorts, his track suit and his suede Puma cleats. And, in this new era of protest, a generation of athletes, many of whom claim Smith as a direct inspiration, are channeling the outsized attention that the public directs to sports toward urgent social and political concerns — police brutality, mental health, voting rights and more."