"This is just two people protected under the Constitution, and it is seen as suddenly offensive. That's a huge problem." 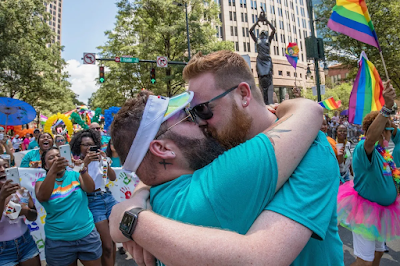 This photo, shot by freelance photographer Grant Baldwin, was taken down from the Gaston County Museum at the direction of the county manager.
(Photo: courtesy of Grant Baldwin Photography)
Via Gaston Gazette
June 15, 2022
Photo removed from Gaston County Museum to be displayed in Santa Fe gallery
Kara Fohner
The Gaston Gazette
A gallery in Santa Fe, New Mexico, will display the photograph that the Gaston County manager ordered removed from a museum exhibit.
The photograph, which features two men kissing after one of them proposed at a Charlotte Pride parade in 2019, will be featured in an exhibit titled "Imagine a World Without Photojournalism" at the Monroe Gallery of Photography. The exhibit runs from July 1 to Sept. 29.
Grant Baldwin, the photographer who shot the image, said that he received an email from the gallery owners, Sidney and Michelle Monroe, asking to use the photograph in the exhibit with plans to include an explanation about how it was removed from the photography exhibition at the Gaston County Museum of Art and History.
The photograph was removed from the Gaston County Museum at the order of County Manager Kim Eagle. The county said in a written statement that Eagle reviewed the photograph and told museum staff to work with the photographer to find an alternative photograph to display "that would be more considerate of differing viewpoints in the community."
The county said that it finds it important that the items the museum shares be "informational without championing political views," according to a statement released by the county Tuesday.
Baldwin, who has been a freelance photojournalist for 11 years, has mixed feelings about the situation. He is sensitive to the impact that the news of the photo's removal may have had on LGBTQ+ individuals in Gaston County, but he is also excited that the photograph seems to have taken on a life of its own.
"I just feel like, you know, on those occasions when a journalist gets to make something that takes on its own narrative and life, ... that's really great, that excites me. And I feel honored that I got to make a piece of work that's doing that," Baldwin said. "So, as a journalist, I'm excited about what's going on, and I don't mean that in any sort of disrespectful way to the challenges that this poses for the LGBTQ community. I'm not happy with what they're experiencing with this."
Michelle Monroe, one of the co-owners of the Monroe Gallery of Photography, said that she learned the photograph had been removed from the museum exhibit from media reports.
"I'm using the photo for several reasons, but it is also a wonderful photograph. We are a gallery, and you know, we don't just want a photograph with substance. We want a photograph that is well done and beautiful, and tells an important story," she said. "We actually have had other work that would represent the human civil rights of the LGBTQ and decided that we would switch out one of those for this, because this was so current and apparently so threatening that we wanted to champion it."
She said that in terms of the arc of history, some moments are signals, catalysts that ultimately have historical significance.
She said the removal of the photograph from the exhibit is a clear signal that history is moving in the wrong direction.
"This piece of art is simply a photograph, right?" she said. "This is just two people protected under the Constitution, and it is seen as suddenly offensive. That's a huge problem."

'It's surreal:' Man shocked his engagement photo at center of Gaston County controversy