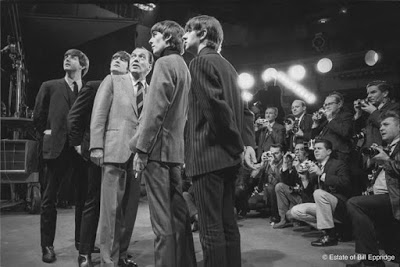 DANBURY, CONN. — A remarkable photographic chronicle by legendary Life Magazine photojournalist Bill Eppridge of the Beatles’ historic 1964 visit to the United States will be featured in a Western Connecticut State University Art Gallery exhibition that will open Tuesday, Jan. 19, and continue through Saturday, March 13, 2016, at the university’s Visual and Performing Arts Center.

A collection of 55 black-and-white photographs taken by Eppridge during his coverage for Life of the British rock group’s visit to New York and Washington from Feb. 7 through 12, 1964, will be shown in the exhibition, “The Beatles: Six Days That Changed the World,” sponsored by the WCSU Department of Art. An opening reception will be held from 4 to 7 p.m. on Saturday, Jan. 23, in the Art Gallery at the arts center on the WCSU Westside campus, 43 Lake Ave. Extension in Danbury. Reservations to attend the free public reception may be made on the VPAC events Web page at www.wcsuvpac.eventbrite.com.

Eppridge, who resided in New Milford in his later years, died in October 2013 in Danbury after an extraordinary career as a photojournalist spanning 60 years. He is widely recognized for capturing iconic images of contemporary history including the Beatles’ Feb. 9, 1964, appearance on “The Ed Sullivan Show” and the poignant image on June 6, 1968, of a busboy kneeling beside the mortally wounded Sen. Robert F. Kennedy in a Los Angeles hotel kitchen moments after his assassination. “You are not just a photojournalist,” he said in recalling the Kennedy image. “You’re a historian.”
Yet the WCSU exhibition of selections from his 1964 Beatles tour photo shoot, which consumed more than 90 rolls of film and 3,000 photographs, would have been impossible without the mysterious recovery of these images seven years after they went missing and the painstaking work of Eppridge’s editor and wife, Adrienne Aurichio, to review and organize this vast photo archive into a comprehensive record of the Beatles’ tour as it unfolded.

Aurichio recalled in a 2014 essay for CBS News marking the 50th anniversary of the Beatles’ “Ed Sullivan Show” appearance that the 26-year-old Eppridge found himself in the right place on the morning of Feb. 7, 1964, to draw the assignment from Life Magazine photography director Dick Pollard to cover the Beatles’ arrival that day at John F. Kennedy Airport in New York. He followed the Beatles as Life’s photo correspondent throughout the first six days of their U.S. tour, shooting spontaneous images documenting performances, rehearsals and private moments during the tour that established the group as an international rock ‘n’ roll sensation.

At the time, Life Magazine published just four of the images from Eppridge’s assignment, and the original film submitted to the Time-Life photo lab for processing could not be located when he attempted several months later to retrieve the images. By his account, at least seven years passed before the film turned up on his desk with no explanation of how it had been recovered.

Aurichio’s role in re-creating Eppridge’s Life photo chronicle of the 1964 Beatles tour began in 1993 when she came across one of his prints from the shoot while researching photographs for a magazine project. Intrigued at the prospect of discovering more photos from the Beatles visit, she soon learned the full story of Eppridge’s recovered film chronicle, which provided the images featured in the WCSU exhibition and in the book, “The Beatles: Six Days That Changed the World,” released in 2014 by Rizzoli Publishing. In his acknowledgments for the book, Eppridge noted that Aurichio played a critical part as co-editor in “piecing together my story. I relied on her vision and experience as an editor to research and unravel the photographs, and then pull them together in chronological order.”

Aurichio observed that Eppridge’s photographs of the Beatles’ 1964 visit reflect the fact that “he made pictures as they happened, never staging anything. The pictures are so personal. You know that there were other photographers and media around, but Bill had a way of focusing in on his subjects — excluding the distractions. You feel like Bill was the only photographer there.”

Born in Buenos Aires, Argentina, in 1938, Eppridge grew up in Wilmington, Delaware, and became interested in photography at an early age, beginning his career as a sports photographer for a local newspaper at the age of 15. In 1959 he earned his first award for photography in the National Press Photographers Association Pictures of the Year competition. The following year he graduated from the University of Missouri School of Journalism with honors as “College Photographer of the Year.” Upon graduation he landed an internship at Life Magazine, which led to a yearlong around-the-world photo assignment for National Geographic and a coveted position as staff photographer for Life from 1964 to 1972. During his tenure at Life, he covered many of the most noteworthy public figures and historical events of the era, from the Civil Rights movement and the Vietnam War to the Woodstock music festival and drug addiction in New York.

After Life closed at the end of 1972, Eppridge served as a photojournalist for other national publications including Time and Sports Illustrated magazines. The numerous professional recognitions for his work included the Joseph A. Sprague Memorial Award, the highest honor given by the National Press Photographers Association. His photographs have been shown in exhibitions across the United States, featured in a major show at the Smithsonian Institution in Washington and included in shows at the High Museum of Art in Atlanta and the San Francisco Museum of Modern Art.


Western Connecticut State University offers outstanding faculty in a range of quality academic programs. Our diverse university community provides students an enriching and supportive environment that takes advantage of the unique cultural offerings of Western Connecticut and New York. Our vision: To be an affordable public university with the characteristics of New England’s best small private universities.

Bill Eppridges' photography will be included in Monroe Gallery's exhibit at photo la, January 21 - 24, 2016; and is available on line here.