A Year of Unprecedented Violence Against Journalists

Via Freedom of The Press Foundation 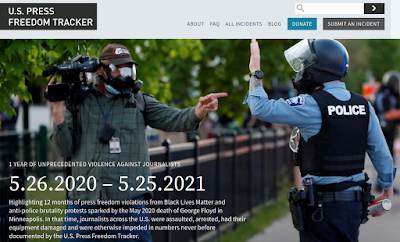 The U.S. Press Freedom Tracker, a project of Freedom of the Press Foundation and Committee to Protect Journalists, has published an overview of a truly remarkable year’s worth of press freedom violations during nationwide protests since the police killing of George Floyd. Building on individually reported accounts of every journalist assault, arrest, damaged equipment, or other press freedom violations, the Tracker aims to provide the definitive telling of the crackdown on journalists that emerged alongside the protests.

“To say the past year was a historic chapter in the story of press freedom in the United States would be an understatement. I had to stop using the word ‘unprecedented’ even as we reported out case numbers that were unlike any we’d ever seen,” said U.S. Press Freedom Tracker’s managing editor Kirstin McCudden. “But even after following each case as it developed, pulling together a full year of data paints a picture of American press freedom that is shocking and alarming.”
Read more on the U.S. Press Freedom Tracker
Find all published incidents
Follow the Tracker on Twitter at @uspresstracker
View Present Tense: A significant exhibition documenting recent extraordinary political, social, and economic events, including the Covid-19 Pandemic.