A Planned Parenthood clinic in Lower Manhattan has become a magnet for anti-choice activists who don’t want to stop with Roe’s repeal.

Women who have abortions should get the death penalty,” Beatrice, a pro-life protester, told The Indypendent. She wore a T-shirt that read “Hope is here” and was one of several women protesting outside the downtown Manhattan Health Center on the Saturday morning before the Supreme Court toppled Roe v. Wade.

While the religious right’s quest for earthly dominion over women’s bodies proceeds undisturbed on this morning, that’s not always the case. On the first Saturday of each month, Witness for Life, an anti-choice group, returns to the same clinic, which is run by Planned Parenthood. They are met by counter-protests organized by NYC For Abortion Rights, a socialist-feminist collective that fights for full abortion and reproductive justice.

The Supreme Court’s ruling in Dobbs v. Mississippi will lead to the outright ban or severe restriction of abortion rights in 22 states that are home to 64 million women and girls, with several more states likely to enact similar laws. It won’t stop there. People who suffer miscarriages or stillbirths could face criminal investigations and those who cross state lines to procure an abortion will be targeted, as will all the people and organizations that help them. Digital surveillance technologies will further the aims of the abortion police in ways that weren’t possible when Roe was decided in 1973.

Meanwhile, New York’s state and local leaders have promised that ours will be a sanctuary state for women seeking abortions and won’t cooperate with out-of-state law enforcement. Mutual aid groups have also vowed to aid those in need. The prospect that anti-choicers, now further emboldened, will step up their protests and harassment outside New York City’s abortion clinics seems likely. If they do, how many of us will be there to greet them? For more, see abortionrights.nyc. 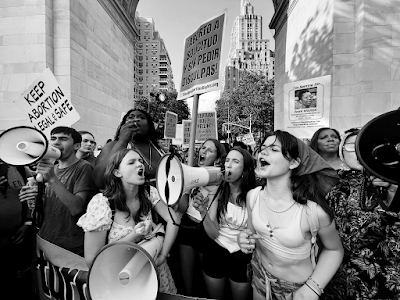